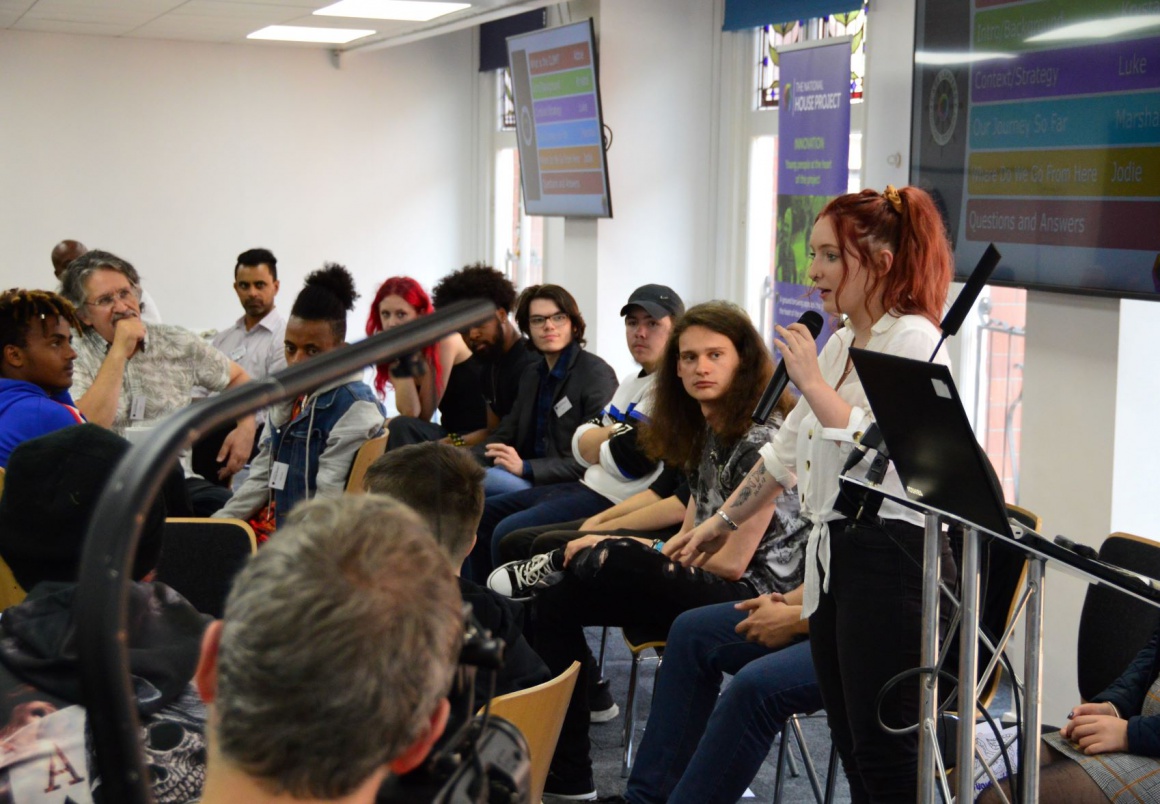 The National House Project celebrates the success of its first year as a Charity!

An invite to Buckingham Palace and shortlisted for the Children & Young People Now Awards, The National House Project celebrates the success of its first year as a Charity.

Local House Project staff and young people from Islington, Oxfordshire, Warwickshire, Rotherham, Doncaster and Stoke were all in attendance and were joined by Local Authorities who are in the process of establishing their own Local House Project.

The day opened with contributions from Mark Warr, CEO and Sue Hammersley, Director, who highlighted the progress of the Charity and the work that had been completed with the Local House Projects so far.

In the first year huge steps to establish the Charity have been made, including a five year business plan, completing case studies with the London School of Economics, presenting at the Nesta ‘Reimagining Services’ Conference and developing a working relationship with Reconomy, who have a Social Value Programme that has led them to work closely with Wolverhampton City Council.

A huge achievement for the Charity was to be invited to Buckingham Palace where all LHPs were represented at the Queen’s Garden Party.

Mark Warr CEO of the National House Project said “Speaking in front of an audience of 120 people comprising of their peers, local authority staff, trustees, elected members and people representing partner organisations is not easy but they managed it superbly. They had prepared for the conference and all young people as part of the House Project Learning Programme complete a ‘Power, Pitch & Purpose’ module that supports them to present researched ideas to a range of audiences. It was such a pleasure to see their progression.”

A BBC editor, who was present, also described their performance as ‘impressive’.

The CLNM is made up of two young people from each of the six current LHPs, with two members sitting as expert advisors at the Board of Trustee meetings, ensuring that young people are at the heart of decision making through all tiers of the Charity.

As part of the day, the NHP shared the progress of the House Project Learning Programme. Developed with young people, it is a modular programme that is web enabled and allows young people to upload their work and chart their own progress. Linked to the psychologically informed practice framework it provides the skills & high-quality learning experiences the young people need to be successful and own their House Project. The Programme is being accredited by AQA and the young people on the programme will then be recorded as in Education Employment or Training (EET).

The whole day was not just a celebration of how far the NHP have come but to also consider where to go next. Mark Riddell, National Implementation Advisor for Care Leavers and Heather Rolinson, Innovation Unit Coach, focused their key-note sessions on the future. Mark Riddell drew on his personal experience to explain his motivation to improve the way in which young people in care are supported into independence. Mark is an advocate of the NHP and is committed to both support ‘scaling’ and to work with the CLNM to challenge systems and improve the offer to young people leaving care. Heather talked about the NHP having the right infrastructure to scale nationally in line with the Department for Education’s ambition to spread best practice.

With the first year under its belt the second year for the NHP has already seen the next cohorts of young people being identified within the current LHPs and new projects initiated in Wolverhampton and Manchester. This November the NHP are also meeting with Andy Burnham to consider a Greater Manchester Combined Authority Approach and are working closely with Life Changes Trust to use the framework in Scotland, with a specific focus on reducing homelessness for care leavers.

The Charity also announced at the conference that it had been shortlisted for the category of ‘leaving care’ in the Children and Young People Now Awards that are to be presented in November.

Speaking about the awards David Brookes, Chair of Trustees said, “it is fantastic that the excellent work that goes on both at the Charity and in the Local House Projects has been recognised. The work is truly transformative and has the potential to improve the life opportunities for young people across the country. From a Board perspective we are delighted that members of the CLNM sit on our Board as it not only keeps us grounded but ensures that young people are at the heart of the decision making process.”

The NHP has ambitions to be sector experts in working with young people and in developing the systems to support them. Integral to this is developing relationships with business partners that are aware of the challenges for care leavers and can support them into the world of work. Furthermore, the NHP are currently looking to replicate Reconomy’s offer of mentoring, CV writing, taster days and apprenticeships to other LHPs across the country.

Staf (Scottish Throughcare & Aftercare Forum) are delighted to share their study of three Local House Projects in Scotland. Coproduced by those with lived experience of care, the study highlights the benefits of The National House Project model not only to the lives of care leavers but also to the staff who support them and the wider community.